BMO Financial had coveted Bank of the West ‘for years,’ CEO 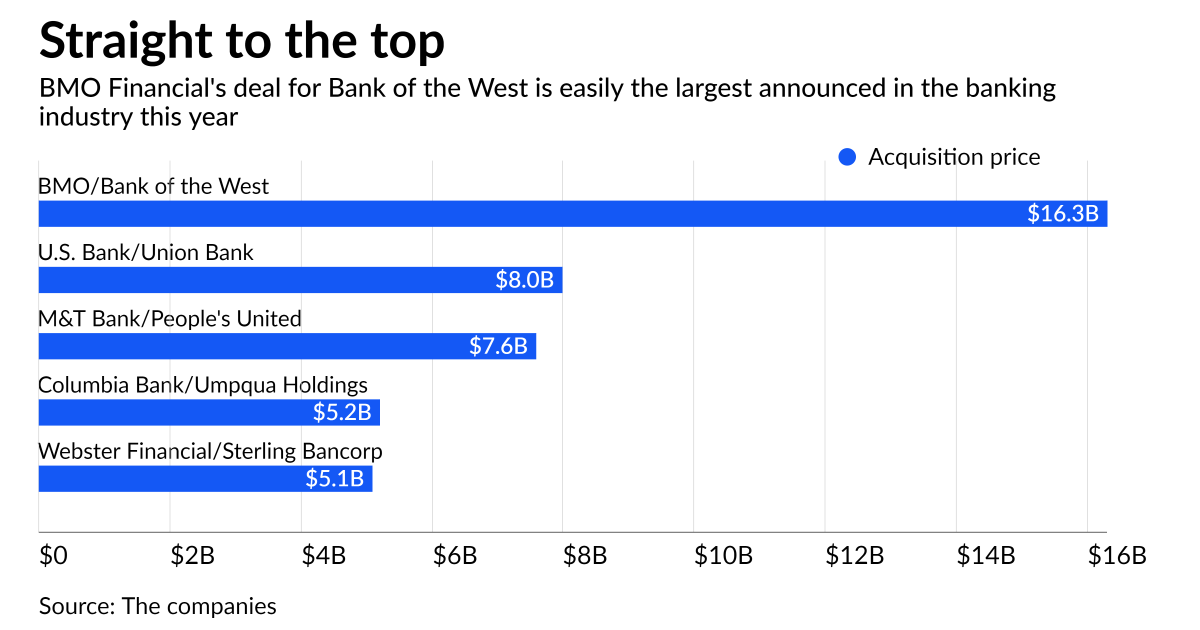 For years, BMO Financial had coveted Bank of the West in San Francisco as it eyed expansion of its Chicago-based U.S. franchise.

On Monday, the Toronto-based parent of BMO Harris Bank finally pulled off a deal, announcing that it is paying $16.3 billion in cash to acquire the $105 billion-asset Bank of the West, the U.S. unit of French giant BNP Paribas.

The deal would give BMO Harris a sizable presence in California — where Bank of the West has the eighth-largest market share — and a foothold in several other states where BMO Harris has no branch presence, including Colorado, New Mexico and Oregon. It would also deepen its presence in several states where both banks operate, including Arizona, Minnesota and Missouri. Once the deal is fully integrated, BMO Harris Bank’s contribution to its Canadian parent’s earnings would increase from 33% to roughly 44%.

“I want to be clear that we’ve been interested in this particular asset for a very long time, for years, in fact,” BMO Financial CEO Darryl White said during a call Monday. “And so it wasn’t one of these things that just showed up on our radar. It’s been on our radar for a long-time.”

In what has been an active year for bank mergers and acquisitions, the deal is the largest by far and would rank as one of the industry’s largest mergers over the past decade. BMO Financial is paying more than twice as much as U.S. Bancorp is paying for Bank of the West’s hometown rival, MUFG Union Bank.

Still, some analysts and investors were surprised by both the announcement of the deal and the one-year timeline the banks set for closing it. As they see it, a lot could happen over the next year. The omicron variant of the coronavirus is threatening to slow the economic recovery. The Federal Reserve has yet to articulate a plan for taming inflation. And there’s growing concern that federal banking regulators will soon apply more scrutiny to large bank mergers.

“It did surprise me they pulled off this transaction because of the size and all the uncertainty going on,” said Scott Chan, an analyst at Canaccord Genuity Corp.

Chris Marinac, the director of research at Janney Montgomery Scott, said the price tag is high, “but not extreme,” given Bank of the West’s strong deposit base and attractive footprint.

“This is not cheap by any means, but I don’t think it’s excessively high,” he said.

BMO Financial said that the deal price is equal to 1.5 times book value, which is in line with multiples of other deals announced this year.

On a call with analysts Monday, executives said the $16.3 billion price included $2.9 billion of excess Bank of the West capital. It said that, excluding the seller’s excess capital, the price would have been $13.4 billion, though it did not provide a detailed explanation or rationale for calling out that difference.

BMO Financial is also gaining access to Bank of the West’s expertise in certain commercial industries like technology and even mentioned the San Francisco bank’s successful wine financing business. It will also gain access to a larger-sized client and the ability to cross-sell some of its other businesses like wealth management, which BMO Financial executives had recently said was a major target area for growth in the states.

Executives acknowledged the uncertainty around the regulatory review process, which is why they set the closing date for the fourth quarter of next year.

But White indicated on the call Monday they were confident their deal would eventually make it through the backlog. He said the Federal Reserve’s approval of three deals late last week “feels to us like a decent sign.”

“We think the transaction meets all the requirements for regulatory approval,” he said. “There is no deposit concentration. There are no competition issues. There are no financial stability concerns…When we put it all together there is no sensible reason that we wouldn’t get approval.”

Jim Dobbs contributed to this story.