With the Fed’s working to tighten its policy, the rolling back of its quantitative easing program and rate hikes are on the horizon. Combined with the recent spikes in inflation, the market is in a state of extreme fear.

Investors are starting to price this in as they exit equities, crypto, and other risk assets. Liquidity shortcomings can occur as this unfolds. An exaggerated liquidity crunch drove markets down in March 2020. In this event, all technical and on-chain data can become less predictive.

Despite the bearish outlook across the crypto markets, there are some positive fundamental and on-chain events. Bitcoin continues to be picked up by strong hands, new investment products and innovations are being launched in DeFi and traditional financial spheres, and large players continue to turn to crypto for new opportunities.

Positive signs from on-chain metrics are apparent despite a -13.49% decline in price over the last week. Bitcoin’s illiquid supply continues to grow as hash eclipsed its previous all-time high, reaching 215.3 million Th/s. In the background, however, are incessantly long speculators. The environment created by these overconfident bulls has led to more long liquidations and forced sell-offs of bitcoin over the last week of trading. 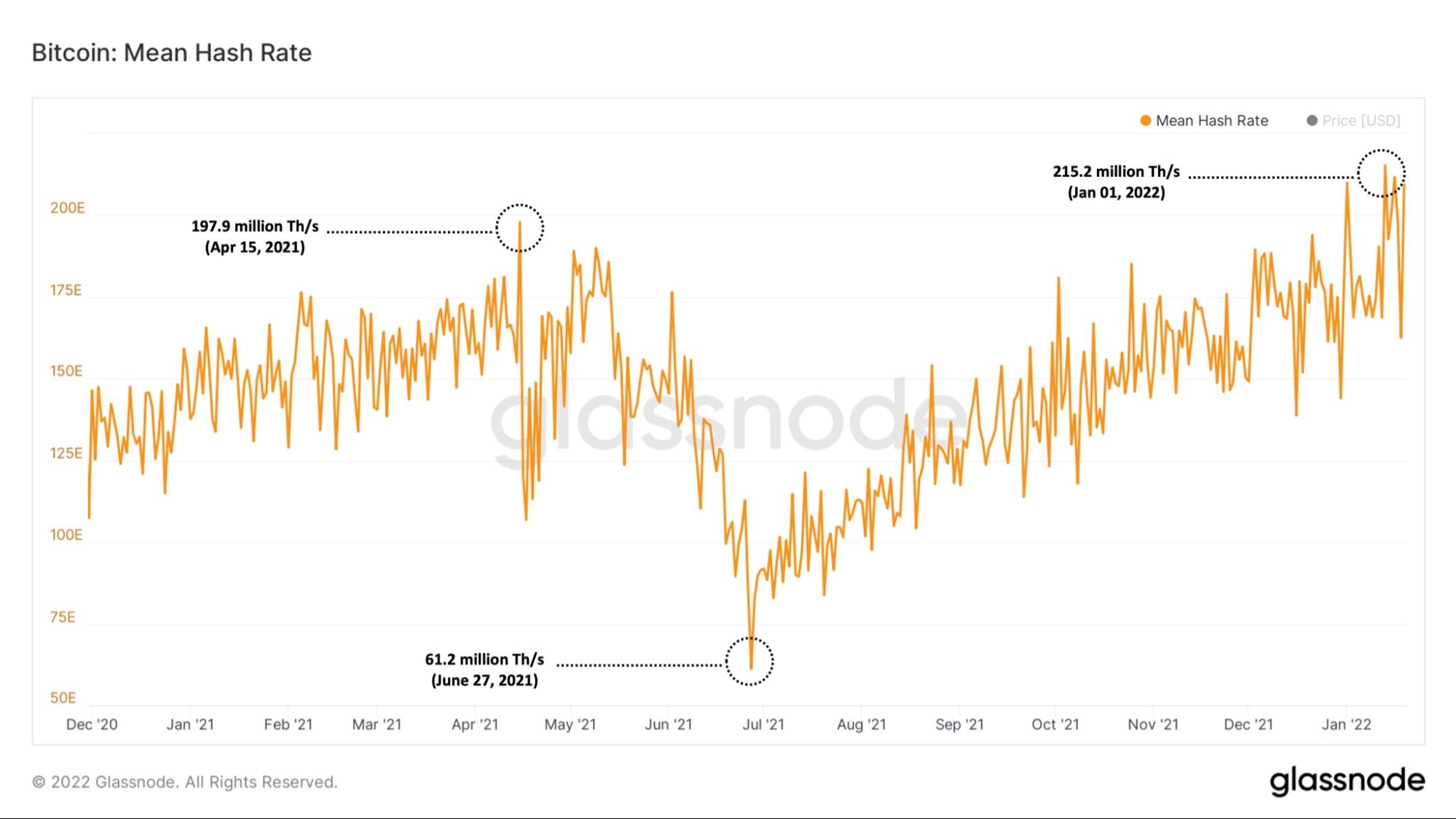 Breaking out over 215 million Th/s, hash climbed 8.74% above the highs achieved during the miner migration in April 2021. The new high achieved is 252% greater than the migration-induced low that came around seven months earlier. There was a positive difficulty adjustment of +9.32% to compensate for the recent rise in hash rate.

The rising presence of bitcoin miners in the western world has contributed to the fast rebound in the network’s hash power. Access to the U.S. capital markets has allotted miners a direct avenue to large sums of funding that were previously unavailable.

The heightened access to capital has allowed these groups to raise capital in order to scale their operations and, in some cases, purchase BTC directly. TeraWulf, Blockcap, Genesis Digital, Marathon Digital, and Stronghold Digital alone have raised over $1.2 billion to expand their operations since September 2021. The capital raised came in the form of debt raises, equity raises, or a combination of both.

The rising competition among Bitcoin miners stemming from the newfound access to capital is only starting to play out in on-chain metrics (i.e., mining difficulty and all-time highs in hash power). There is a lag between the time miners raise the capital to expand operations to the time it is physically manifested. For example, Marathon Digital recently purchased $900 million worth of ASICs from Bitmain with the expectation that all of the machines will be online by early 2023. As a result, increases in hash power and the competitiveness of the bitcoin mining landscape is a needle mover to watch out for through 2022. 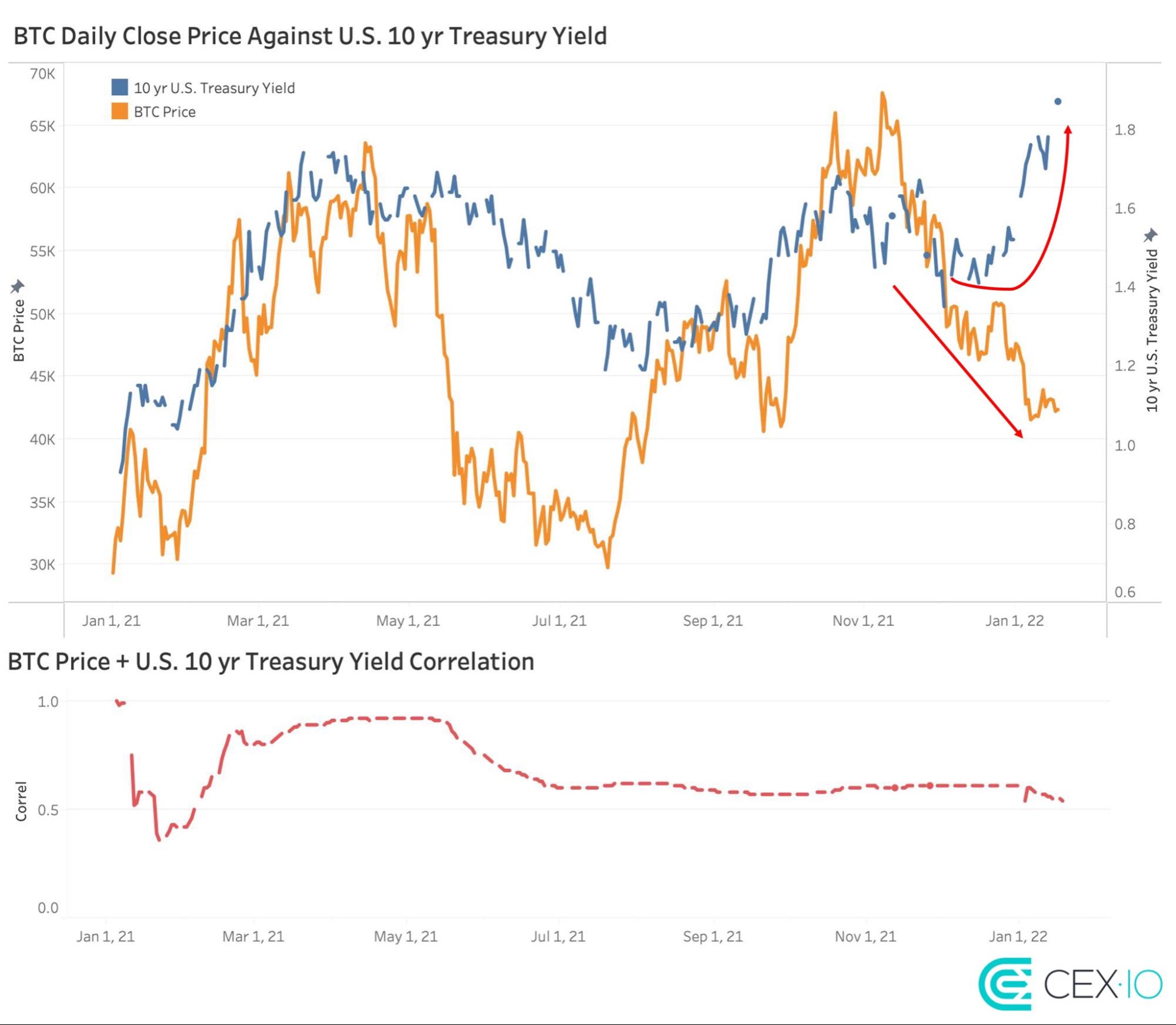 The correlation between the market value of Bitcoin and the U.S. 10 year Treasury yield maintained an average correlation of 0.7 throughout 2021. Now, there is a divergence between the two forming as the 10 year yield continues to rise and the price of BTC grinds lower. 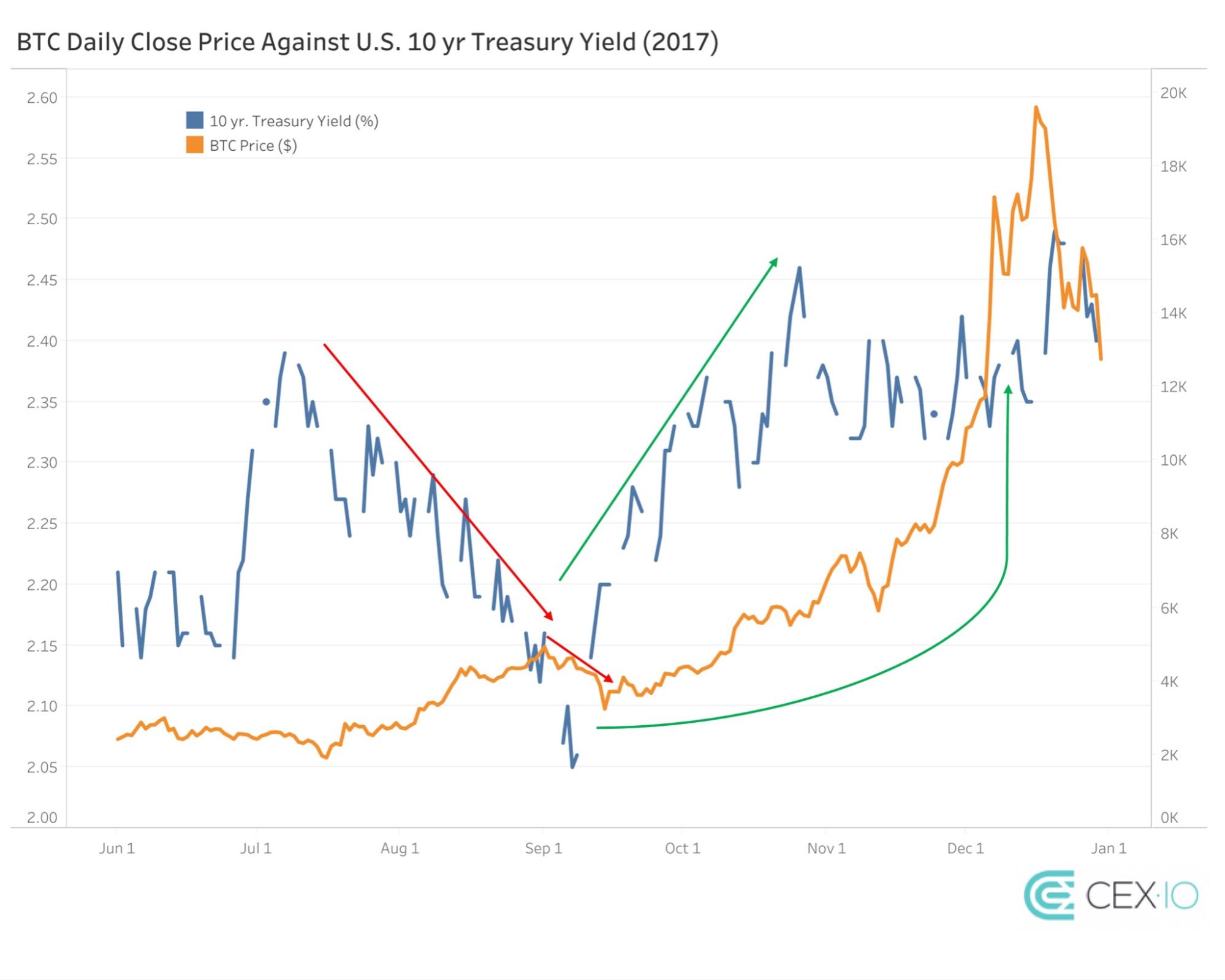 Positive funding and relatively steady open interest continues to be the story in the BTC futures market. This environment is conducive to long liquidations which can put a drag on the market value of bitcoin. This was the case with the sell-off on January 5 as ~$130 million worth of longs were liquidated. Negative funding is indicative of an environment more accommodative of short liquidations, which have the opposite impact on price of long liquidations. Funding only briefly flipped negative on January 13 after price dropped about 18% from December 27, 2021 to January 7, 2022. 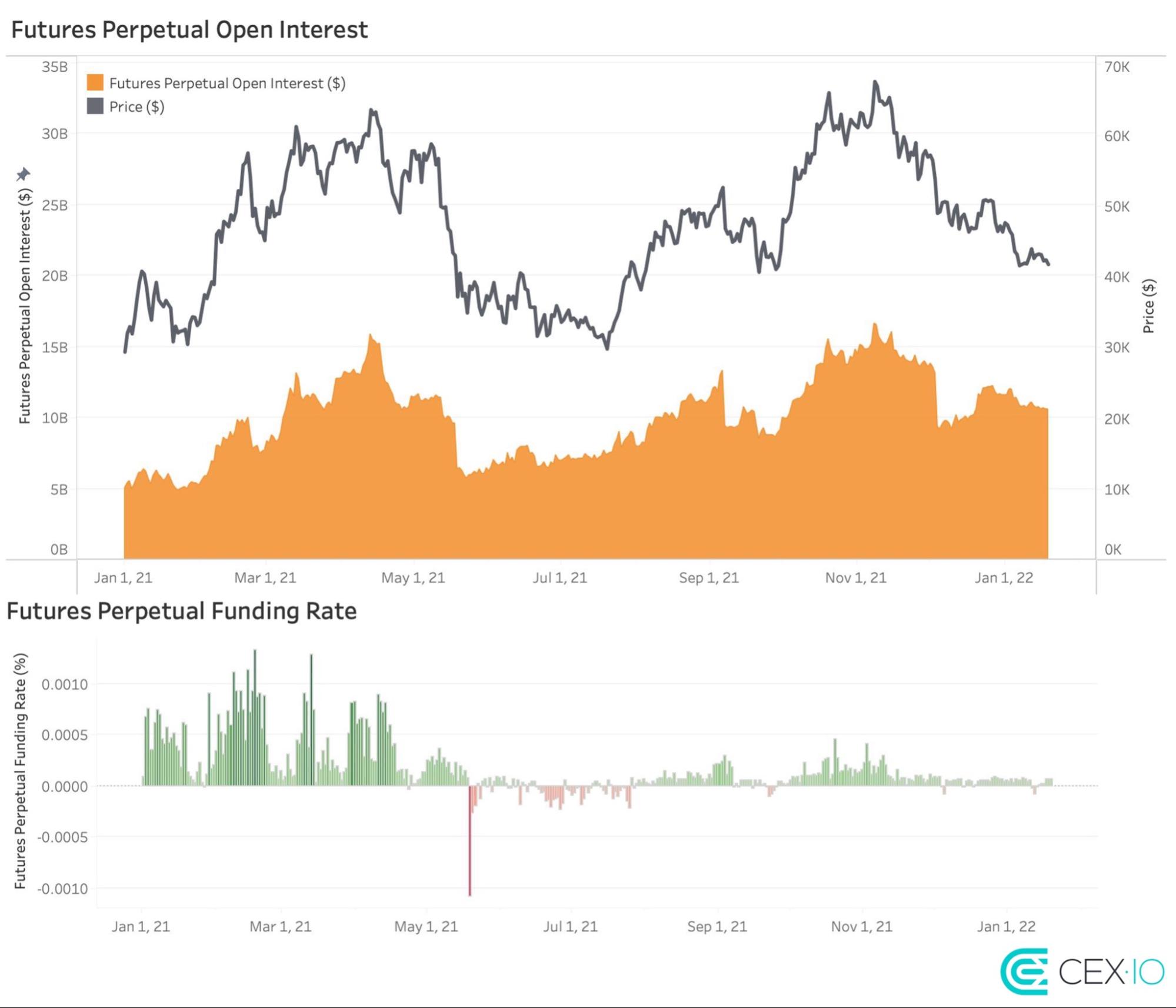 Options open interest (OI) declined by 43% as ~$5 billion worth of options expired at the conclusion of 2021. BTC was trading at ~$40,000 the last time options open interest was at the current level. December 31 marked the second largest single day decline in options OI since March 27, 2021. 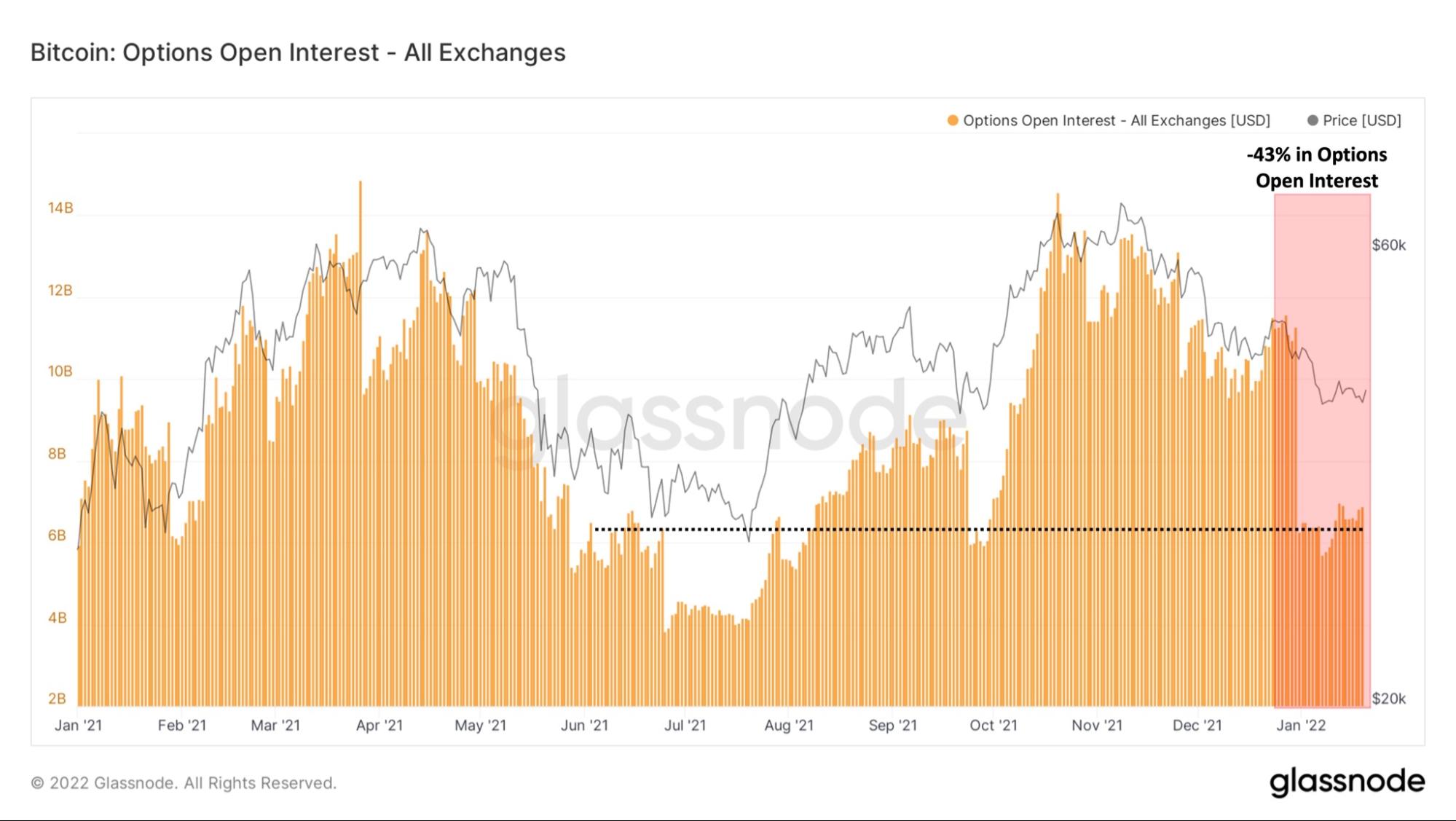 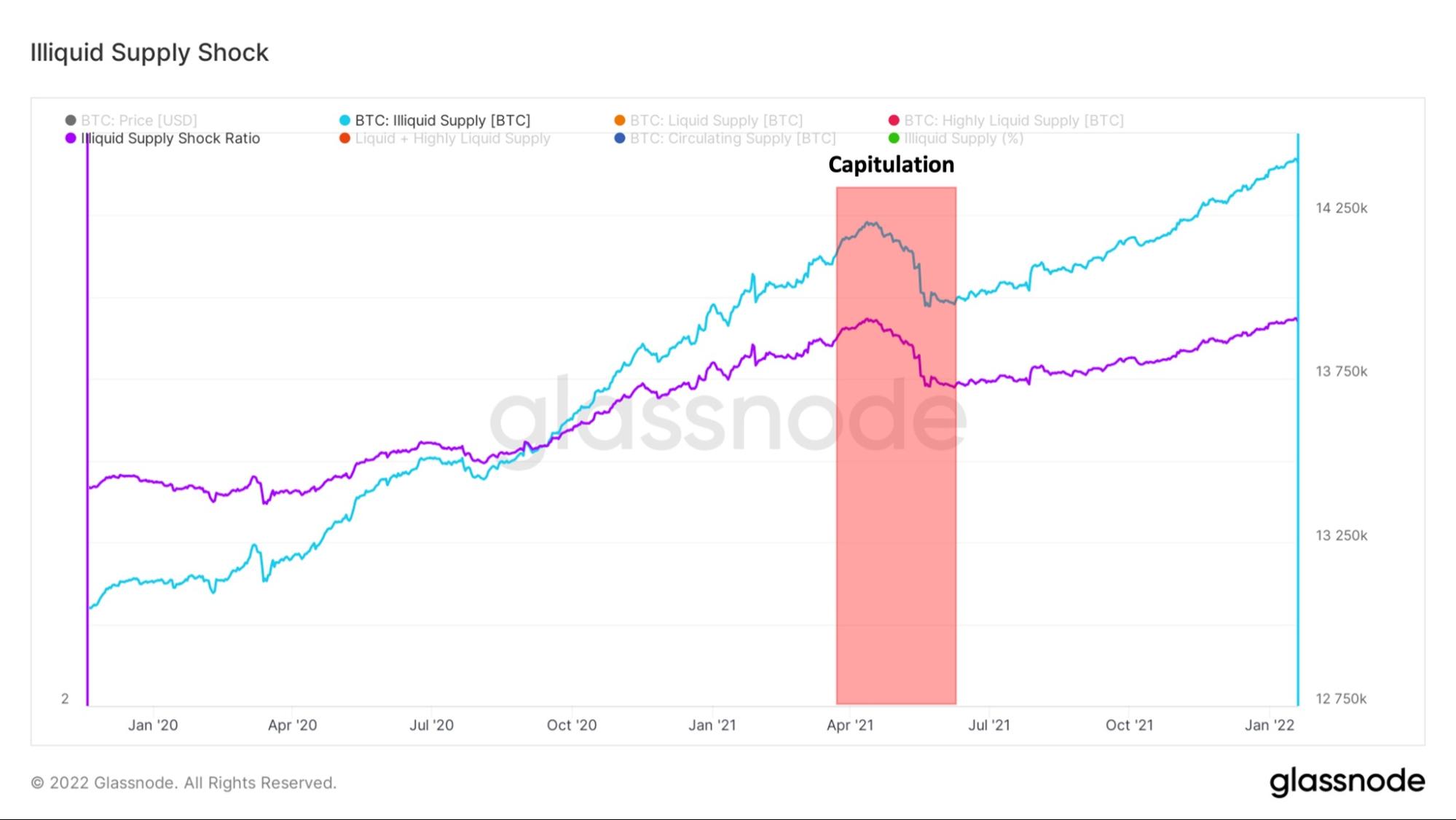 Technical indicators across the board are suggesting that BTC is oversold. Most notably, the Relative Strength Index (RSI) is at a level that marked some of the more pivotal moments in bitcoin’s history. Other indicators, such as the moving average convergence divergence (MACD), are suggesting BTC still has some strength despite being ~50% off of the $69,000 all-time high.

Bitcoin’s Relative Strength Index currently sits at 23 and is as oversold as it was in May 2021, March 2020, and November 2018. Bitcoin was trading during these times at ~$36,000, ~$6,000, and ~$3,500 respectively. These points in bitcoin’s history have marked some of the best buying opportunities. However, the current fundamental landscape diverges to varying extents from these points in time.

The environment during the crash in Spring 2021 most closely resembles the current fundamental backdrop. The Nasdaq was down ~7% from its high at the time and growth and tech stocks were down by a similar magnitude (or more in some cases). RSI began to bounce from its bottom of 29 at this time, which created a bullish divergence as price inched lower. 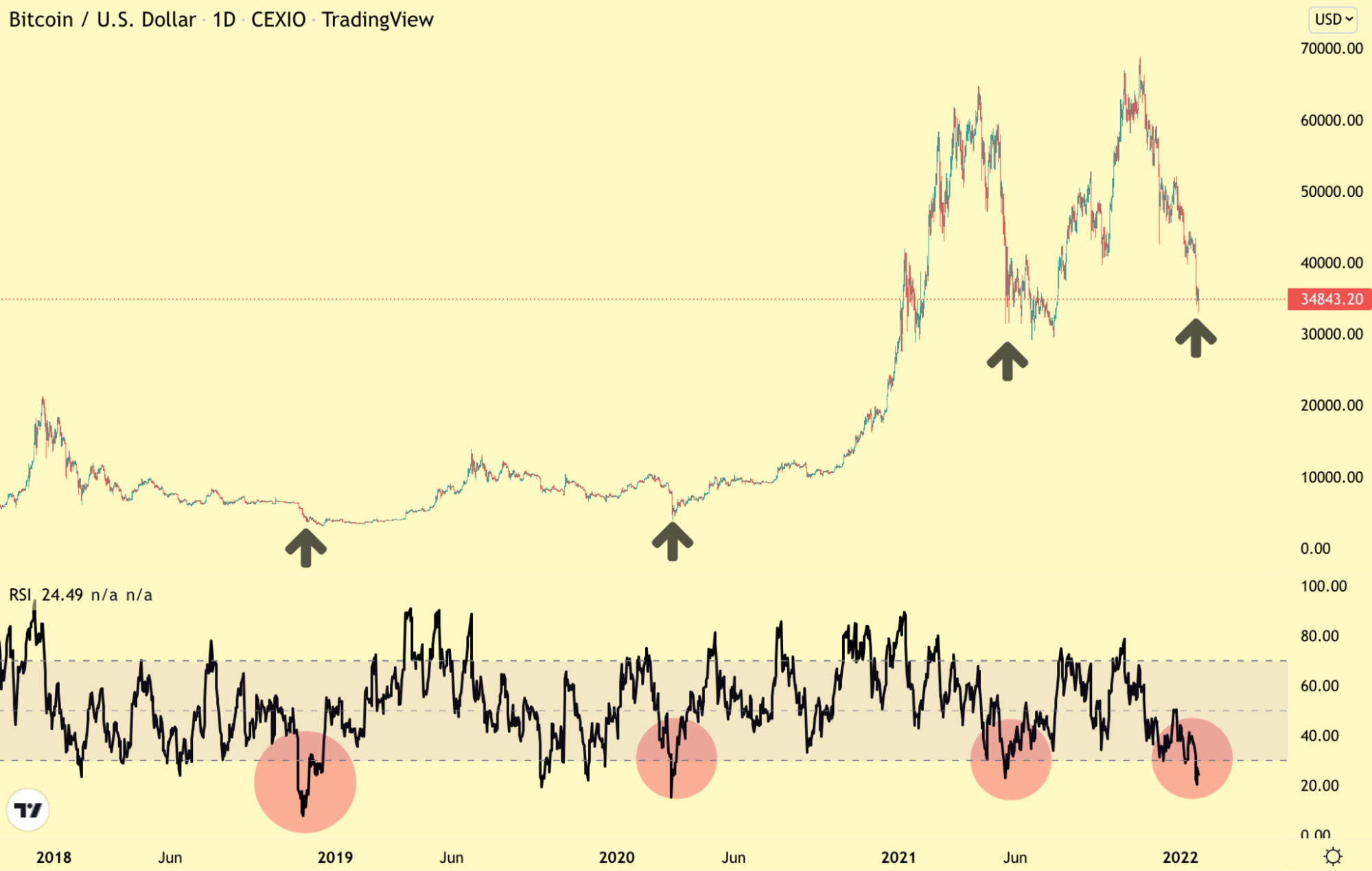 Bitcoin’s daily MACD is the second most oversold it has been since CEX.IO launched its services. May 2021 marked the only point deeper into oversold territory. The indicator is starting to show signs of a bullish divergence from May’s bottom. It currently sits ~40% higher than it did after bottoming out last Spring, and price is about 6% lower from the same time stamp. MACD bounced off the current level of about -2,800 in December of 2021.

MACD has been flat since December 11 despite dropping nearly 25% since then. This is a positive indication that momentum is relatively stable even as market price is falling. This is indicative of a more near-term divergence forming between price and MACD. 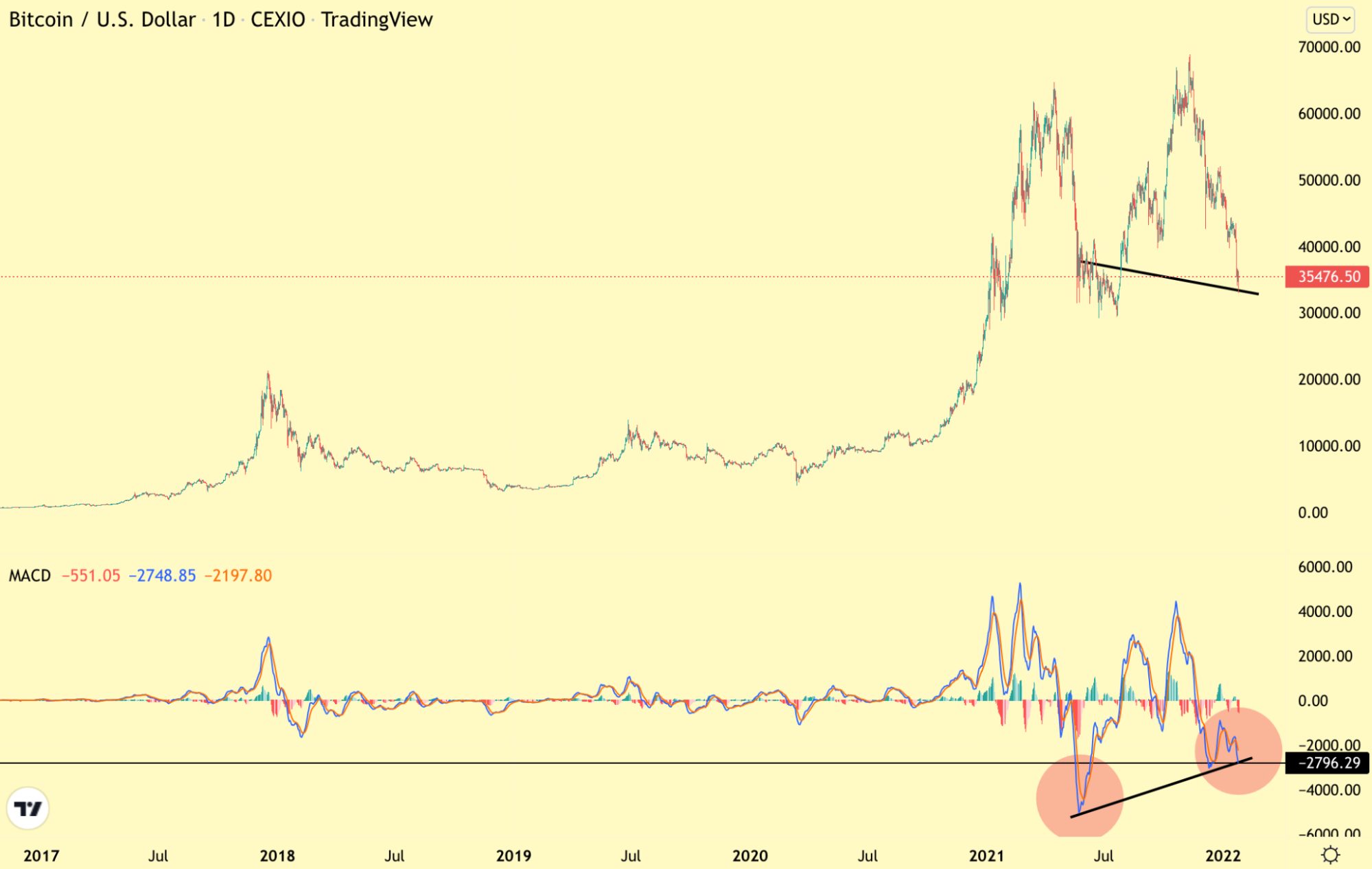 A key bearish cross in moving averages on Ethereum’s daily candles is close to confirming. A similar pattern was observed at the conclusion of the 2016 bull market, however, history seldom repeats itself. There has already been plenty of downside in ETH’s price over the last several week’s which leaves room for a relief rally. The following observes this cross in moving averages and identifies upside and downside targets. 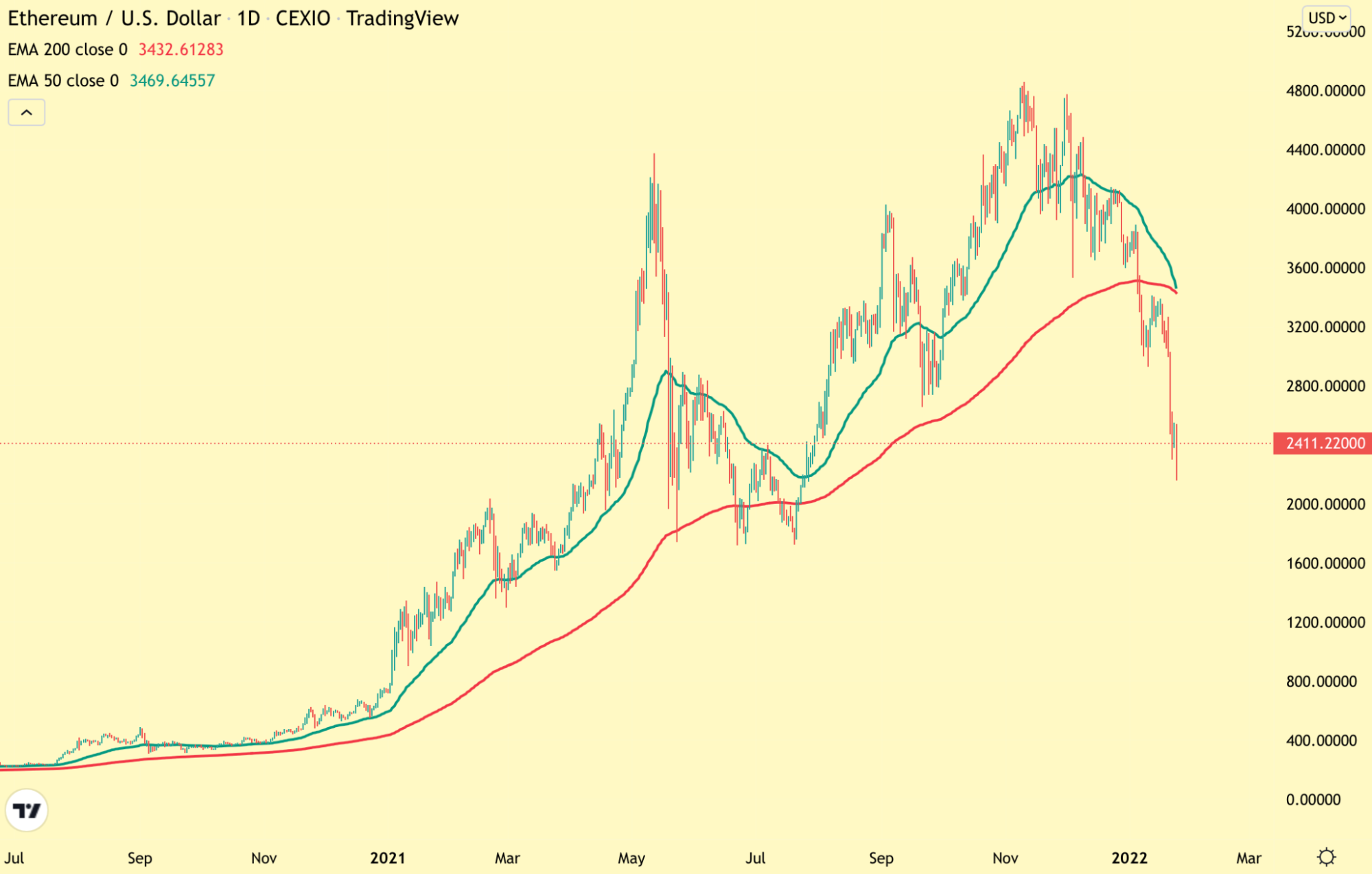 A death cross doesn’t always mark the end of a cycle or a larger trend, though. It can also mark a point at which price begins to find its bottom. Steep drops in price can compress these moving averages before continuation in a trend continues. This scenario was observed in March 2020 (green box) in the wake of a bleak fundamental outlook. Thus, it is important to consider upside and downside scenarios when a death cross occurs. 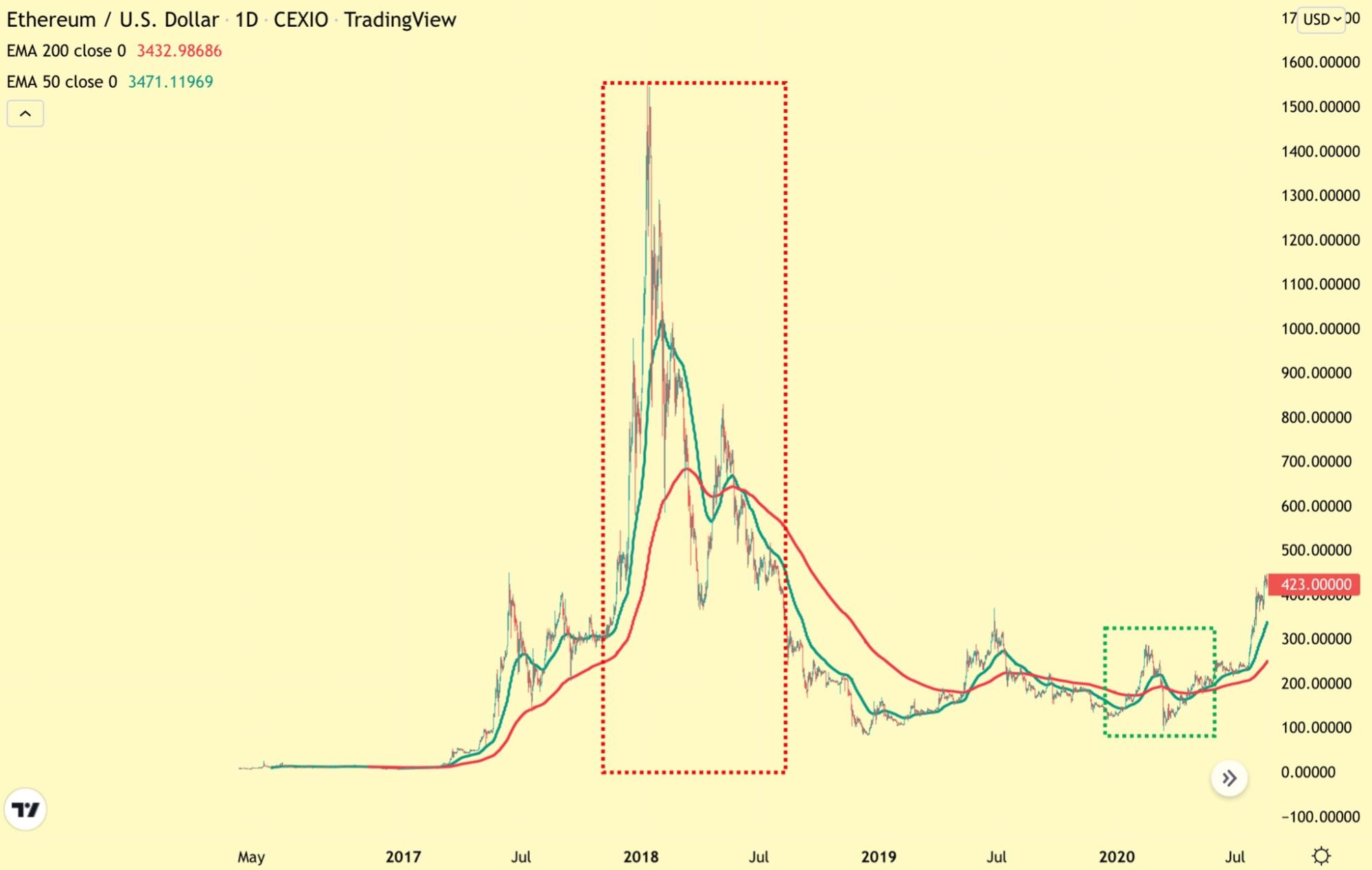 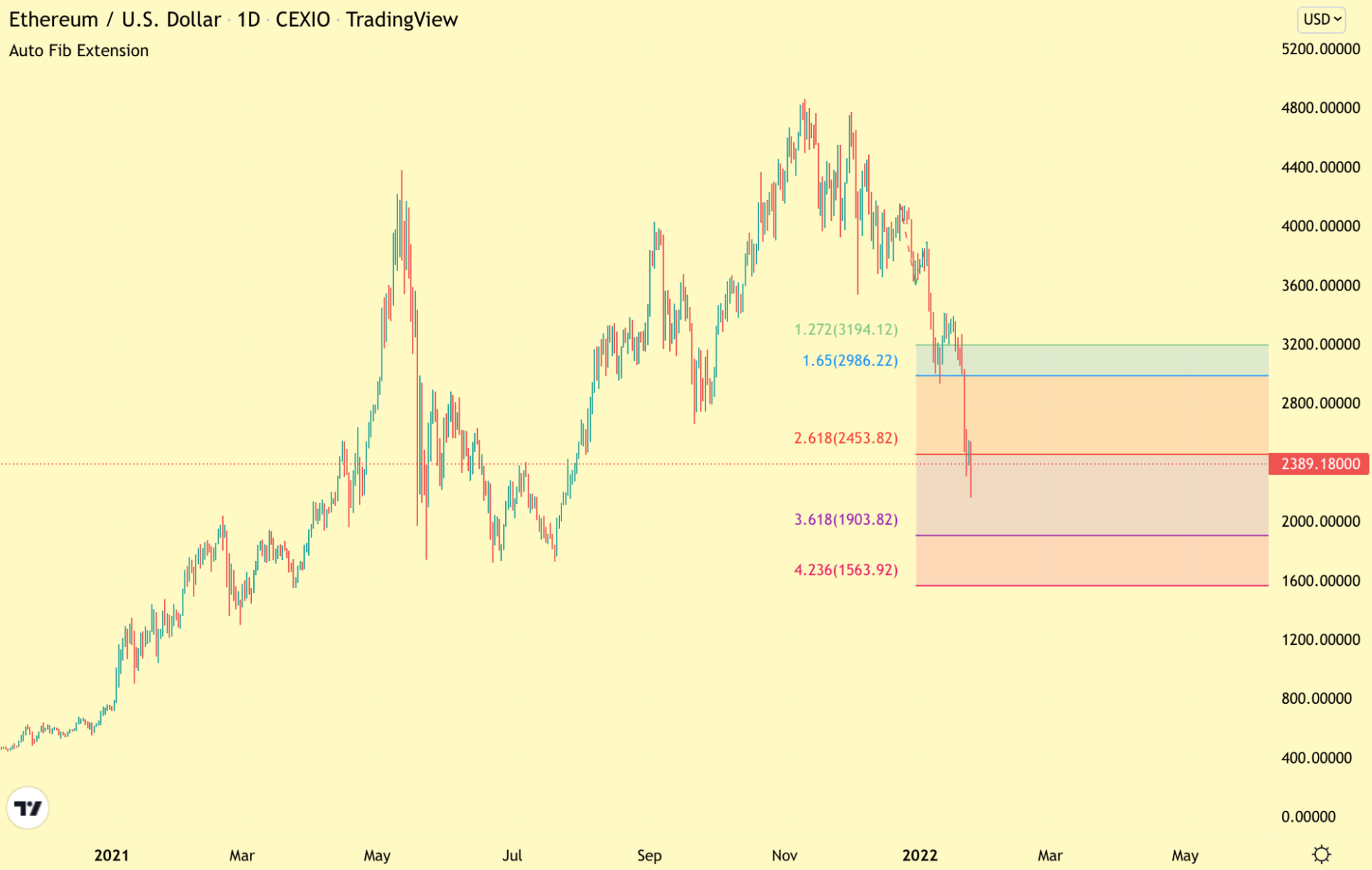 El Salvador is moving forward to issue Bitcoin Bonds announced by President Nayib Bukele in November 2021. Bukele tweeted on January 5 that the scope of the some 20 bills being presented to congress will serve as a guarantee for the bonds and the “full re-engineering of the economy and of the way a nation state does business.” The bills will be centered around market regulation and the issuance of securities based on digital assets.

The bonds will feature a 6.5% coupon and will be used to raise up to $1 billion in the initial issuance. Half of the proceeds will be used to purchase BTC directly and the remainder will be used to fund the country’s geothermal mining initiative. Blockstream and Bitfinex will help facilitate the issuance and sale of the bonds, and have both played integral roles in getting El Salvador on the Bitcoin Standard.

The Blockstream Satellite is used by El Salvador to broadcast the Bitcoin blockchain from outer space. This insulates the country’s mining operations from network or internet connectivity interruptions, and allows it to function 24/7.

On January 18, American multinational tech giant Intel announced that it will be entering the Bitcoin arena. The “Bonanza Mine” chip will be an ultra-low-voltage energy-efficient bitcoin mining ASIC. Details of the chip are slated to be announced at the ISCC Conference in February. Griid, a Bitcoin mining company with a focus on sustainability, released in an S-4 filings that it has entered in a supply agreement with Intel for the specialized mining chips. The filing also noted that the company intends to implement Intel’s ASIC into its new industrial scale mining operation alongside other ASICs from Bitmain and MicroBT.

AAVE has been monumental in its historical efforts to drive innovation and adoption of DeFi. In its newest initiative AAVE seeks to bring DeFi and CeFi closer together with its permissioned lending platform, Arc. Arc is set to launch with 30 institutions in the pipeline. Fireblocks, an institutional-grade digital asset custodian, is among these entities.

AAVE Arc is a DeFi product designed for traditional capital allocators, like hedge funds, family offices, and asset managers. Labeling it as “a web3-native experience for financial institutions,” AAVE has built a permissioned solution that is a separate deployment of the AAVE protocol. This dynamic gives institutions an avenue into decentralized finance all while staying compliant with the regulatory standards that govern them. The operational framework of the product highlights that Arc and AAVE’s permissionless offerings are similar, with the key difference of Arc using “whitelisters.”

The most obvious hindrance to institutions becoming participants in the ecosystem is DeFi’s nature of being permissionless; meaning it lacks KYC, AML, and related standards. Arc solves this problem by using whitelisters to conduct KYC, AML, and other onboarding services for this new set of users.

BTCS is a publicly traded blockchain infrastructure company that is traded on the Nasdaq. The company announced the first ever bitcoin dividend on January 5, after which its stock price climbed nearly 70%. The dubbed “bividend” will be a five cent per share dividend, the first of which will be paid out on March 17. Holders of BTCS shares will have the option to opt out of receiving their dividend in BTC, and can instead receive it in cash. The company noted it is still deciding on the prospect of additional bividends as it prepares for its first payout.

Disclaimer: Information provided by CEX.IO is not intended to be, nor should it be construed as financial, tax or legal advice. The risk of loss in trading or holding digital assets can be substantial. You should carefully consider whether interacting with, holding, or trading digital assets is suitable for you in light of the risk involved and your financial condition. You should take into consideration your level of experience and seek independent advice if necessary regarding your specific circumstances. CEX.IO is not engaged in the offer, sale, or trading of securities. Please refer to the Terms of Use for more details.