What is Moloch DAO? – 101 Blockchains

The nature of change in the web3 ecosystem is not only dynamic but also highly volatile. Therefore, mechanisms for optimizing social coordination have evolved as one of the most notable highlights of web3 technology. Decentralized Autonomous Organizations, or DAOs, have evolved as the most promising public goods project in the world of blockchain, crypto, and web3. They help in guiding coordination among different members of a community on specific issues such as governance or future of the project.

Moloch DAO is one of the most popular alternatives for self-organizing, funding, and developing the necessary public infrastructure for ETH 2.0. The interesting highlight of Moloch is that it focuses on a new attempt to resolve philosophical conflicts among humans when they have to coordinate with each other. The following discussion helps you figure out essential information about Moloch DAO and how it works.

The first thing about a discussion on Moloch DAO would focus on answers to “What is Moloch DAO” and its significance. First of all, you must notice that Moloch is a simple and open-source DAO framework tailored with three distinct value advantages. Moloch offers the benefits of extensibility, security, and usability. Users can have less code with Moloch, thereby resulting in lesser bugs and more security.

The easy-to-understand and use tech in Moloch ensures better usability irrespective of the complex technology. Moloch DAO framework also features the ability to extend functionalities to cope with new community needs. The popularity of Moloch DAO depended on its design as a Minimum Viable DAO alongside the introduction of ‘ragequit.’ With the help of the ‘ragequit’ feature, members can go away from the DAO by exchanging their shares in return for a claim on assets in the treasury.

Moloch DAO was introduced to the Ethereum ecosystem in February 2019, followed by many other DAOs. What does the Moloch DAO achieve? The answer focuses on the goals of Moloch DAO for funding and supporting the development of public goods project pertaining to ETH 2.0. As of now, Moloch DAO has supported many projects with almost $700,000 in grants.

Some of the notable projects featuring contributions from Moloch DAO include Lighthouse, Ethereum Cat Herders, DApp Node, and Tornado Cash. In addition, the DAO has also convinced community members to design alternative funding systems. For example, the Open Grants system includes an allocation of 3600 ETH for ETH 2.0 development.

Excited to learn the basic and advanced concepts of ethereum technology? Enroll Now in The Complete Ethereum Technology Course

The Moloch DAO ensures varying governance weights for members in an Ethereum ecosystem as an improvement over multisigs, which allocate a single vote to every member.

The most striking highlight of Moloch DAO focuses on permissioned membership, where existing members vote on addition of new members.

Ragequit is also another critical highlight in discussions on “What is Moloch DAO” and how it works. It implies that members could withdraw some or all their membership shares from the DAO in return for a proportionate claim on the assets in the DAO treasury.

Submission and Processing of Proposals

The features can help you understand the answer to “How does Moloch DAO work?” with a clear idea about the series of actions. You must note that any action in Moloch DAOs happens through proposals. At least one member of the DAO must sponsor a proposal after it has been submitted. The voting period for a proposal begins after sponsoring process, and members could vote on the proposal according to individual shares. Eventually, a proposal with more votes in its favor can pass in the DAO without any mandatory quorum requirement.

After passing, the proposal has to complete a grace period before its execution. The grace period is an opportunity for members who did not vote for the proposal to ragequit. As a result, minority members can enjoy better safeguards without the need for a quorum. Proposals in Moloch DAO can help in granting shares to new members alongside transferring assets to recipients from DAO treasury. Another interesting highlight of Moloch DAO for the Ethereum ecosystem refers to the special helper smart contracts, also referred to as Moloch Minions. The special helper smart contracts can help Moloch DAO interact directly with different smart contracts.

If you are new to smart contracts, you might not be sure of its capability. Check the detailed  guide Now on Smart Contract Use Cases

The factors responsible for introducing Moloch V2 also serve as important highlights in understanding the future of the DAO framework. One of the foremost objectives for designing Moloch V2 focused on improving coordination at a technical level. How does Moloch DAO achieve the same? Moloch V2 emphasizes grant-giving and funding with projects showcasing the explicit desire for issuing capital in stable currencies.

This is a plausible alternative to the option to ragequit your shares in Moloch DAO for the funding. Here is an overview of “How does Moloch DAO work?” to identify the process of issuing grants on Moloch V1. Here are the important steps in working on Moloch V1, which showcase the necessity of Moloch V2.

What is the problem in such approaches with Moloch V1? The proposals might take around two weeks to process from submission to finish. As a result, the value of the shares could change considerably in a limited period of time owing to volatility in ETH. It is important to remember that the primary goal of a DAO should focus on accessibility to any individual who supports the DAO’s cause. Therefore, the process of submission and passing of proposals must be simplified further to welcome newcomers on board easily.

What Are the Highlights of Moloch V2? 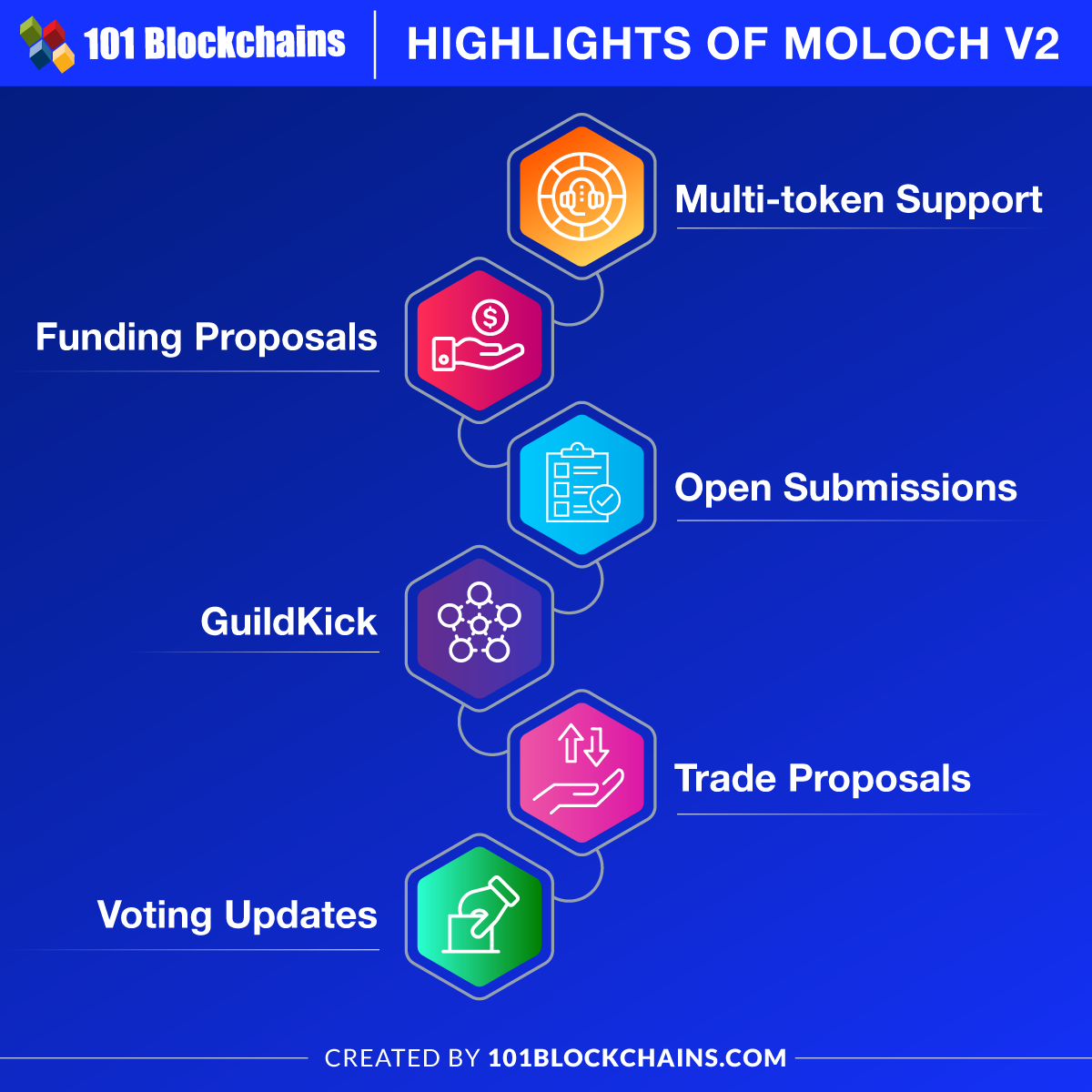 The new Moloch v2 DAOs could store almost 200 different assets in comparison to one, thereby enabling DAOs to hold assets other than Ether. For example, stablecoins, project tokens, and time tokens can enter the DAO ecosystem.

DAO users can receive funding in DAO assets such as DAI or ETH. Therefore, the future of Moloch DAO would witness lesser members opting for ragequit option. For example, a proposal can include a request for completing mitigating the volatility on 1000 DAI during a two-week processing period.

Another important feature of Moloch V2 that opens it up to the wider Ethereum ecosystem refers to Open Submissions. In accordance with the new feature, anyone could submit proposals independently, even the non-members of the DAO. This is a promising improvement over-relying on a DAO member for submitting a proposal.

The most plausible and innovative improvement in Moloch V2 is evident in the introduction of GuildKick. It shows that Moloch DAO is truly a public goods project meant for the community’s interests. If you find any member working against the interests of the DAO, you can force a ragequit on them. With the help of a unique proposal, users can ensure that malicious agents are kicked out of the DAO. The malicious agent would have they’re shared burned as they receive the relevant share in the assets of the DAO treasury.

A simple update in the proposal processing schema of Moloch V2 includes marking proposals as “Unsponsored Proposals.” Any proposal submitted to the DAO is marked as an “Unsponsored Proposal,” and members could choose the DAO they want to sponsor. The remaining process is the same as Moloch V1.

The features and components in the simple understanding of how Moloch DAO works show how the DAO is an effective intervention for public goods project landscape. The primary goal of Moloch DAO focuses on offering a public infrastructure for ETH 2.0. Therefore, the future of Moloch would focus on improving these benefits.

First of all, you need to note that the simple DAO framework has depicted humongous growth with around 100 Moloch forks in existence. Popular examples such as Orochi, MetaCartel, Rocket, and Raid Guild have helped in collective aggregation of over 200 proposals. All the proposals amounted to the efforts of 300 different members to evaluate the best side of DAO coordination.

The interesting and powerful performance outcomes of Moloch DAO invite attention to the future of Moloch DAO and what it entails. The answer to your doubts about the next stage in evolution of Moloch DAO refers to Moloch V2.

Get familiar with the terms related to ethereum with Ethereum Flashcards

The detailed overview of the working and new improvements in Moloch DAO showcase that it is an integral tool for the future of decentralized applications. Moloch DAO focuses on empowering the Ethereum ecosystem for better scalability and easier access to capital for project development. The simple overview of “What is Moloch DAO,” and its working can empower beginners to enter the world of DAOs.

Moloch DAO offers promising value in different use cases, such as better grant allocation and improved governance. Interestingly, you can learn more about Moloch DAO with simple documentation offered on its official website. Dive deeper into the technical specifications of DAOs and how they can transform the future of blockchain and crypto applications.

Join our annual/monthly membership program and get unlimited access to 25+ professional courses and 55+ on-demand webinars.